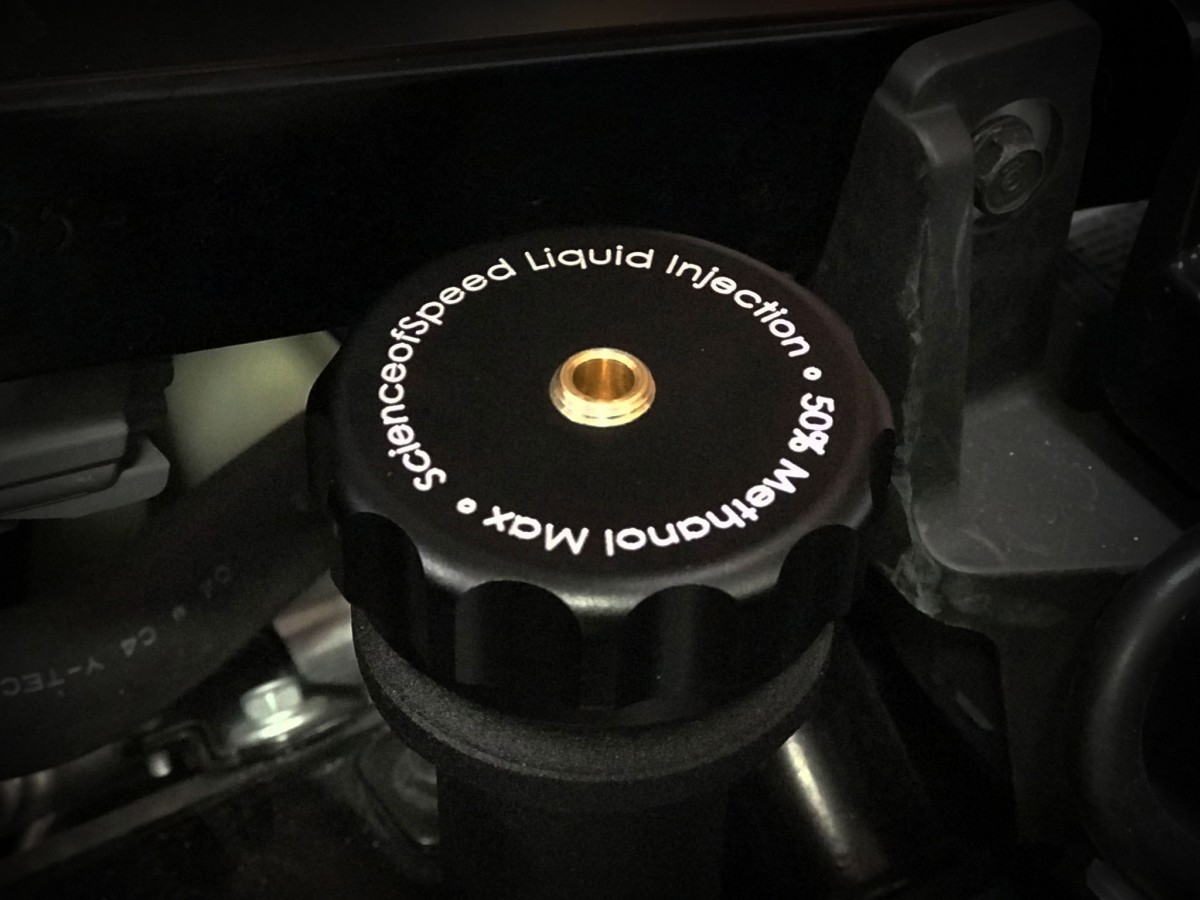 ScienceofSpeed adds Liquid Injection to Second Gen NSX: As with any turbocharged engine, the performance from the 3.5L twin-turbocharged Second Generation NSX degrades after repeated acceleration cycles. With multiple acceleration runs on our Superflow chassis dyno it's normal to see the intake temperature sensor in the intake manifold increase by 40-50 degrees over ambient temperature. 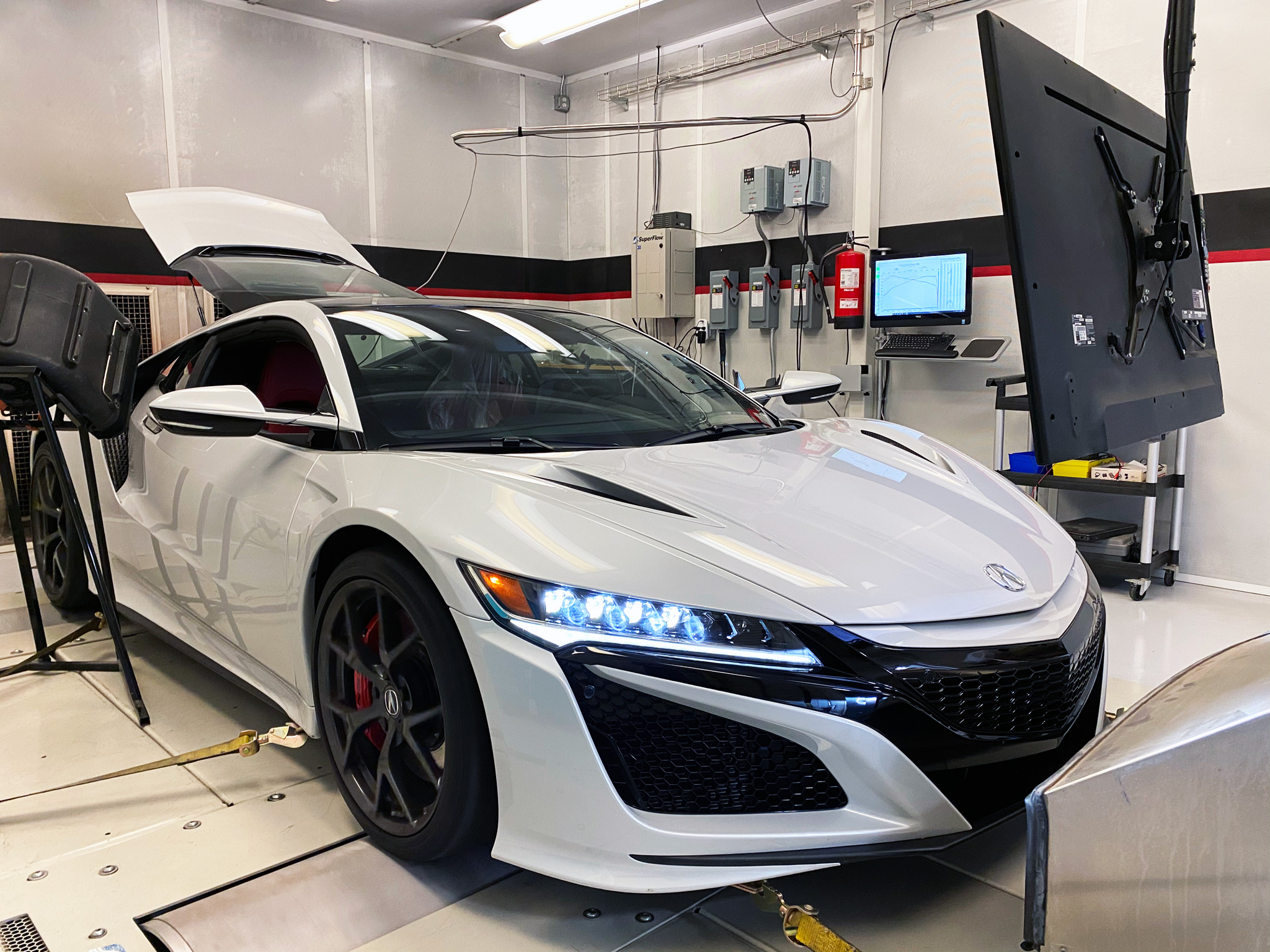 As the intercoolers and manifold heat up from charge temperature and radiant heat from the engine - we've observed engine performance decrease by 30-40 horsepower after six to eight back-to-back acceleration runs on NSX engines at factory boost levels. Increase boost pressure and increased charge temperatures result in 40-50 horsepower loss in only three acceleration runs. 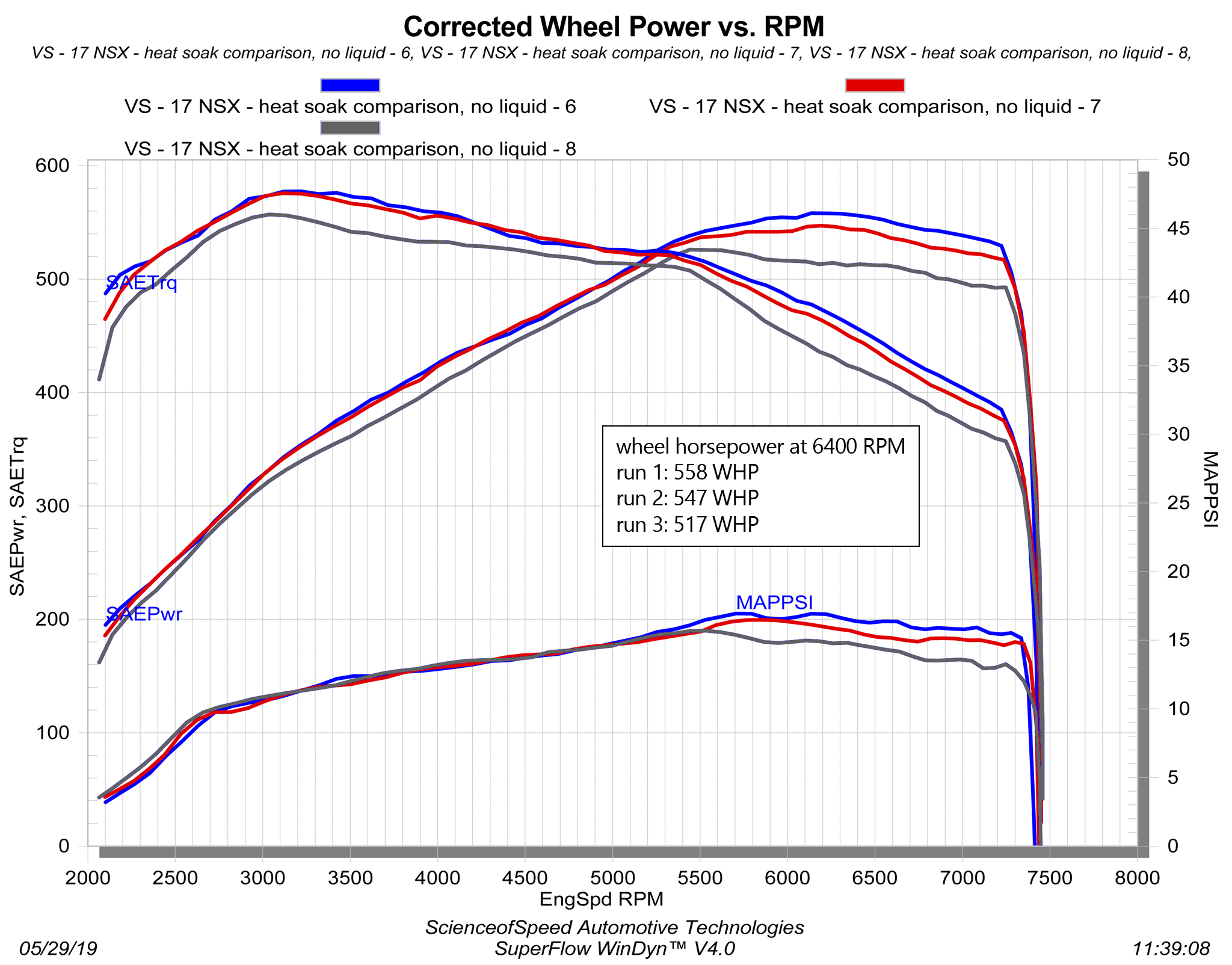 performance is reduced by more than 40 horsepower after three tests

The dyno cell at ScienceofSpeed has three high-pressure blowers in addition to the cell's high volume fan. While this is a lot of air movement around the car, it doesn't simulate the same amount of airflow at speed in free air. Despite the increased airflow, similar elevated inlet temperature and loss in performance have been measured on the street and track.

ScienceofSpeed began experimenting with liquid injection to supplement the factory air to air intercoolers. Using liquid injection, we were able to maintain the same engine performance after up to eight back-to-back acceleration runs within 2-3 horsepower. Inlet temperatures decreased to near ambient temperature even under load. 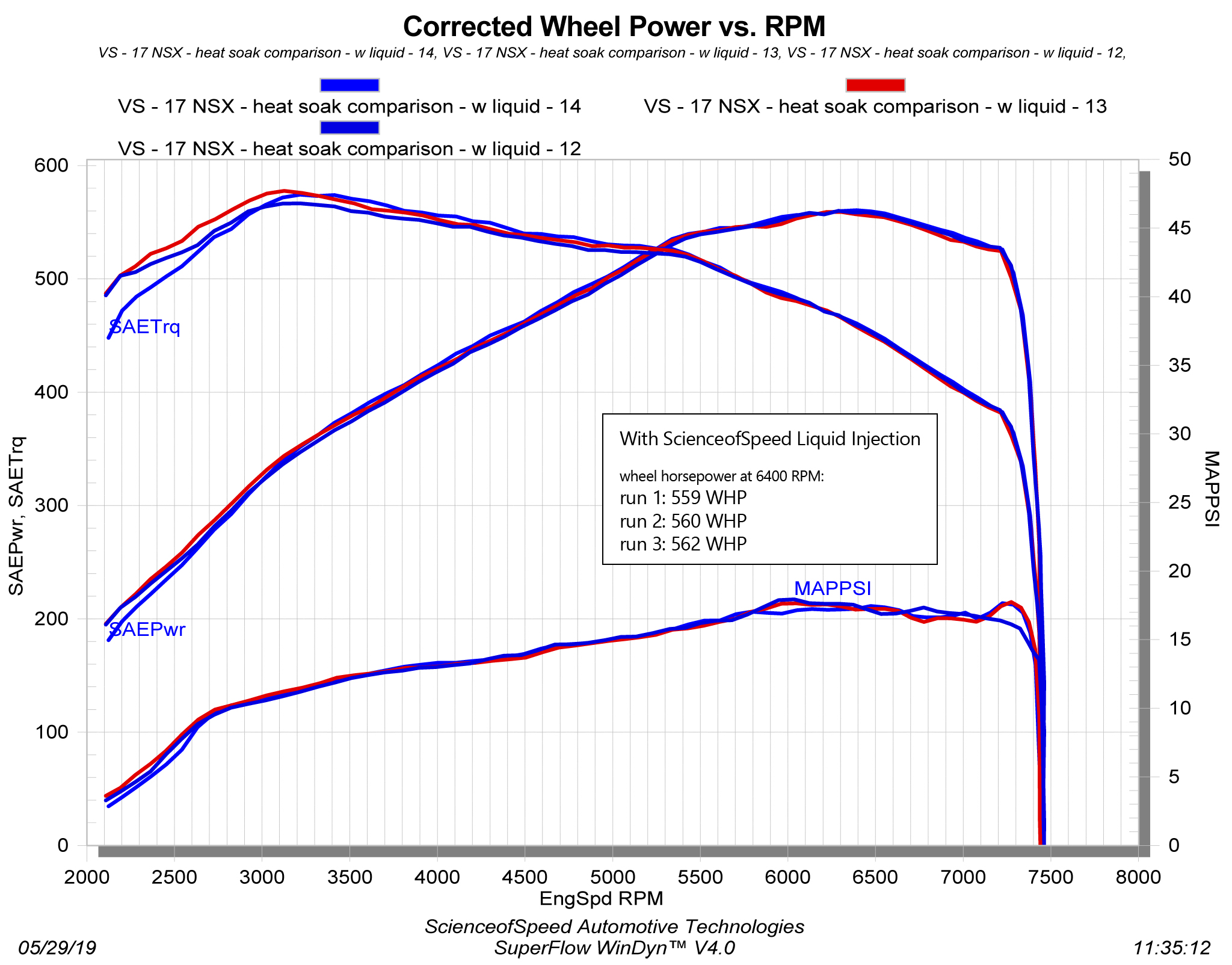 With the addition of the JB4 Tuning Box - we've been able to achieve impressive engine performance from the NSX - however, gains have been limited especially with 91 octane fuel. Even with improved fuel quality, heat soak still eventually reduces engine performance after several acceleration cycles.

To improve and maintain consistent engine performance, the ScienceofSpeed Liquid Injection System injects a high-pressure mist of water and methanol into the engine. The liquid injectors are installed in CNC machined aluminum plates which are installed between the factory manifold and throttle bodies. Liquid is pumped under high pressure from an NSX-specific liquid reservoir and the injection is modulated by an advanced controller which is triggered by engine load. This ensures that liquid injection is used under optimal conditions and conserves supply. The system includes intelligent fail-safes to ensure reliable operation. 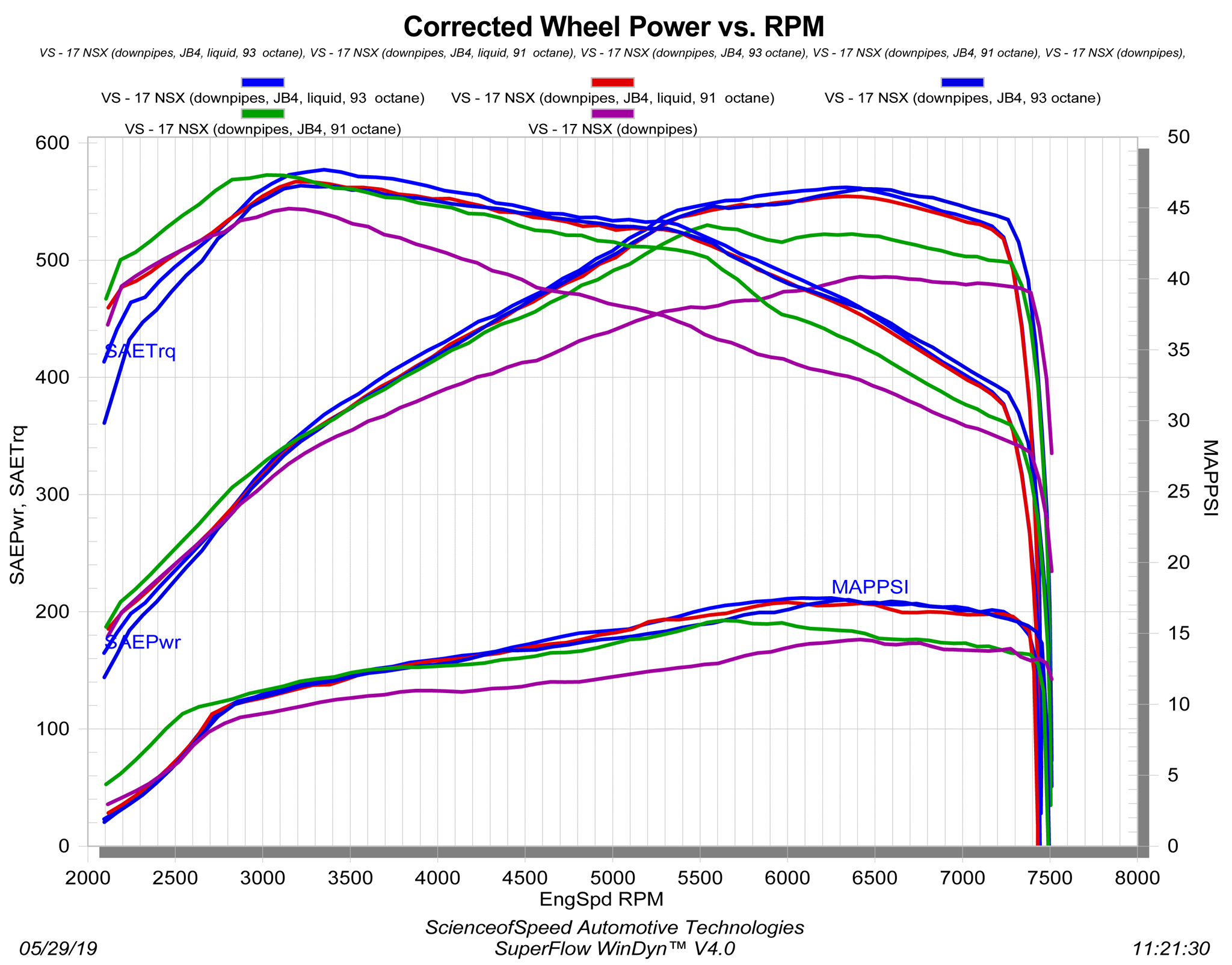