This entry was posted on February 22, 2019 by ScienceofSpeed. 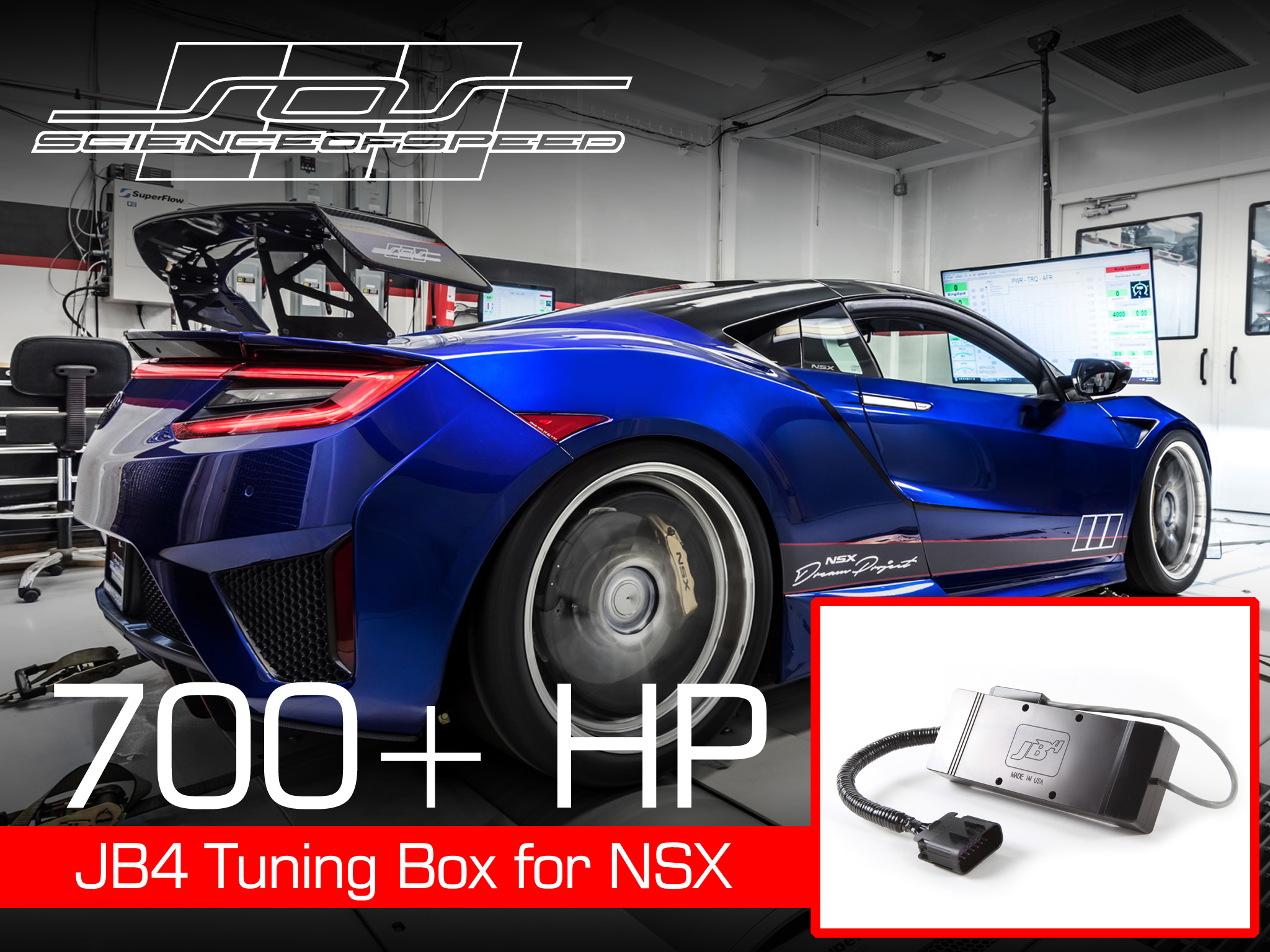 In our previous blog posts, we've discussed engine tuning options for the Second Generation NSX. In the first installment of this series, we tested a device which intercepts the three pressure sensors on the NSX to increase turbocharger boost pressure. We saw the potential with this approach, but were not satisfied with the trade-offs - specifically the non-factory connectors that had to be held on with a zip tie, the unsealed enclosure requiring drilling in to and mounting in the trunk, and lack of integration to the factory ECU for important sensor feedback, such as coolant temperature and throttle input for engine safety and smooth boost delivery.

Next, we tested an ECU reflash solution from Hydra. The results included limited gains of 5-20 horsepower. Hydra is working dilligently to better understand the factory ECU and will hopefully provide updated calibrations in the future.

After these tests - we realized that an add-on device, which works in conjunction with the factory ECU's engine safety strategies, is likely ideal until the factory ECU is fully understood. The factory NSX ECU is complex and without documentation available, raising various torque limiters may have the undesired consequence of reducing safety protections including knock and lambda control and temperature controls. We feel that by raising performance while allowing the factory ECU to maintain control of fuel, ignition, and safety strategies would be the best solution for extracting more power while maintaining engine integrity.

After some research, we began discussions with Burger Motorsports, manufacturers of the JB4 Tuning Box. This device operates similarly to others, however, it includes some notable advantages:

The CAN integration of the JB4 is a significant advantage. By tapping into the NSX's CAN bus network, we are able to eliminate the need to tap the camshaft sensor for engine speed. In addition, by utilizing this connection, we are able to monitor parameters such as coolant temperature and throttle position. This allows the JB4 to only add additional performance only once the engine is up to temperature. In addition, by monitoring throttle input - performance can be added only when the driver demands it with the throttle pedal. This eliminates the "jerk" in power delivery we found as boost pressure is added under partial throttle conditions with other devices.

The sealed enclosure offered by the JB4 provides the advantage of being able to mount the device into the engine bay - eliminating the need to drill the trunk panel to place the device in the trunk or cabin.

Next - the JB4 from ScienceofSpeed includes a Bluetooth module, which allows you to connect to the JB4 wirelessly with an Apple or Android device using the optional app. This allows you to switch maps, monitor and log gauges, and update firmware if new features are offered in the future.

Lastly, a major advantage of the JB4 is integration for liquid (methanol) injection systems. The JB4 includes inputs and outputs for controlling and monitoring liquid injection flow. The integration of liquid injection will allow significantly increased performance without having to rely on race fuel.

At this point, you can probably tell that we were pleased with JB4's unique capabilities following initial testing. We were thrilled to learn that Burger was interested in developing a firmware for the JB4 specific to the NSX. ScienceofSpeed identify the required CAN bus parameters and sourced the factory style connectors for all connections that the JB4 makes. The wire harness that ScienceofSpeed manufactures is truly plug-and-play - no wires need to be cut and no zip ties required to keep connectors together. In addition, the wire harness integrates neatly into the engine bay, and the JB4 is completely hidden under the frame member above the factory ECU.

Once the JB4 was able to connect to the NSX, we began testing (with 91 octane fuel, standard in Arizona) - and found the same issue with the factory ECU closing the electronic throttles above certain engine speeds.

With our ECU data logging tool, we are able to log parameters such as knock counts and did not observe knock counts triggered by the ECU. We had assumed that the factory ECU was limiting torque through throttle control based on some threshold, like flow, being exceeded. However, in speaking with an engineer familiar with the strategies of the factory ECU, a theory developed that the ECU was closing the throttle as a pre-emptive control against impending knock based on feedback from the sensors. A 2 point rise in octane (to 93) immediately produced significant gains without the throttle closing. Once this was better understood, tuning with 91 octane (light blue) was completed and 40 wheel horsepower gains were achieved with an increase of only 1-2 PSI. Limited ECU intervention was achieved by the ramping-in of boost in a smoother more progressive way - aided by throttle pedal input through CAN. 60 wheel horsepower gains were achieved at only 2-3 PSI using 93 octane (green).

Amazingly, the JB4 was able to produce these gains with only 3-4 PSI increase and was achieved with ScienceofSpeed Sport Downpipes, and the factory exhaust muffler still in place.

As you can see, the performance gain with 98 octane is over 100 wheel horsepower (and over 120 wheel horsepower including the gains from the downpipes). The throttles stay at 100% throughout the test and the power taper near rev limiter is likely from the approaching the flow limit of the single-port cylinder heads, turbocharger / intercoolers, and/or factory muffler (additional manifold pressure results in no additional gains)

It can be said conclusively that the NSX responds extremely well to moderate increases in manifold pressure - especially when the moderate increase in boost is coupled with higher test fuel. In the near future, ScienceofSpeed will release a liquid injection system which includes a plug-and-play connection to the existing JB4 units to achieve near 98 octane performance with 91/93 octane fuel.

Once power was confirmed on ScienceofSpeed's Superflow Chassis dynamometer, street logging was conducted, showing more than a half-second reduction in acceleration time in third gear. Later, the customer was able to test the NSX in a timed quarter mile drag race where nearly a half second was reduced with not-ideal traction conditions. Most importantly - the trap speed was the highest ever posted for a NSX at 132 MPH.