This entry was posted on July 3, 2017 by ScienceofSpeed. 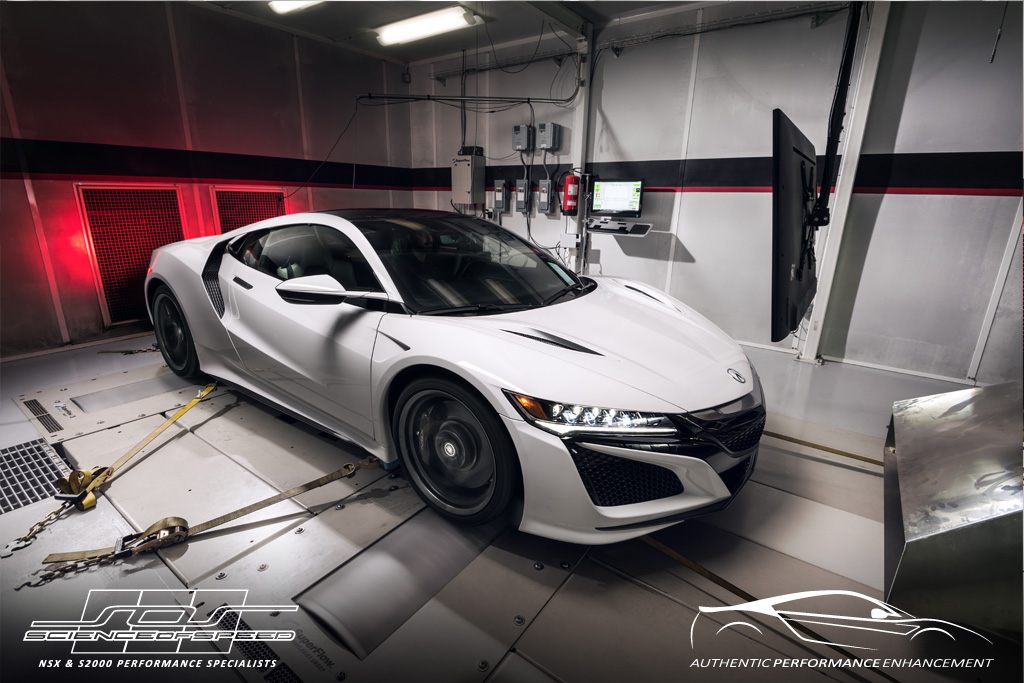 The technologically advanced 2017 Acura NSX has been an exciting platform for us to become familiar with. We would like to share some of the insight we have gained in our experience of testing the 2017 NSX should you decide to have your new NSX tested on a chassis dynamometer.

Chassis dynamometer type: The electrified powertrain 2017 NSX utilizes a twin electric motor unit providing propulsion to the front wheels and a twin turbocharged internal combustion engine with a single electric motor providing propulsion to the rear wheels. An all-wheel drive dynamometer is required, and we believe that a mechanically linked system is required for the various electric control modules to work properly during testing. The engineering grade chassis dynamometer at ScienceofSpeed is manufactured by Superflow. The front and rear roll-sets are coupled with a mechanical driveshaft and feature independent load cells in the front and rear to measure front and rear torque split. The mechanically coupled roll-sets allow the car to be tested as if it was on a flat road and an eddy current power absorber can introduce load to simulate a grade or to hold the engine at specific engine speed and load points. 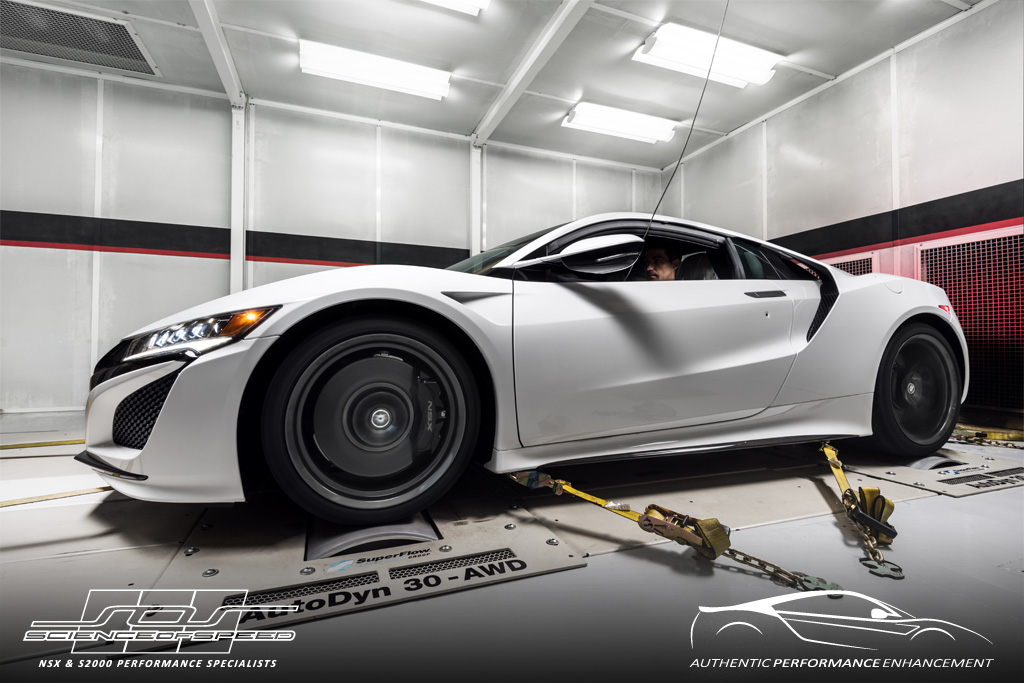 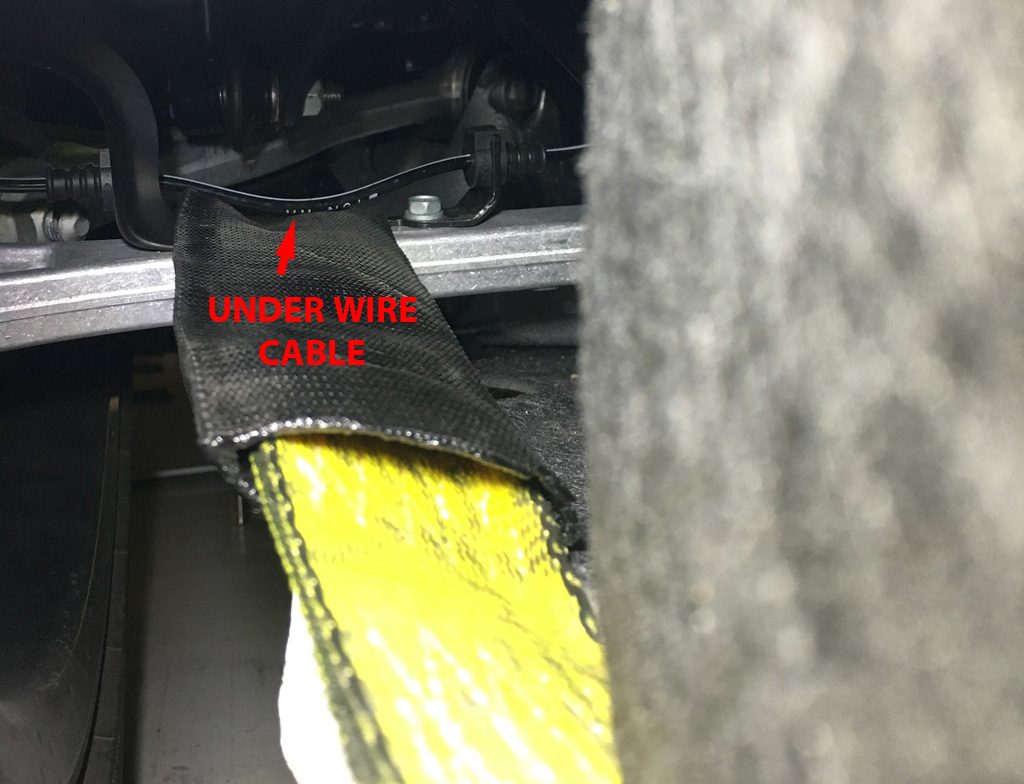 Yaw Sensors: the NSX’s sophisticated vehicle dynamics system will likely fault during testing. This is likely because the yaw sensors, which detect angular velocity from the vertical axis, will not detect the expected motion during acceleration. Clearing this system after testing requires the factory HDS system, or a professional grade diagnostic tool capable of resetting the various modules that the yaw sensors interface with. Once cleared, the system will require about five minutes of the ignition power being off to reset.

Cooling: It’s quite apparent the effort that the engineers spent on the NSX’s airflow management once you study the various surfaces and complex ducting the car features to channel and direct airflow to the eleven heat exchanging devices on the NSX we’ve counted so far. Three particular areas need a significant amount of cooling during testing: the frontal area for the radiators and the front twin motor unit’s heat exchanger and each of the passive-flow intercoolers mounted in each side duct. Many chassis dyno testing facilities will not have sufficient cooling volume and pressure capacity to properly cool the new NSX during testing. We use a total of five blowers and fans when testing the NSX with a large capacity high pressure fan in the front, two smaller high-pressure blowers on custom stands for the intercoolers, and two large fans providing generalized cooling and exhaust ventilation (not all shown in the photos). That’s more than 50,000 CFM of air movement! High pressure is key to force enough air mass through the stacked heat exchangers and thick intercoolers. When testing, coolant and inlet temperatures should be monitored to provide consistent testing. Important details to consider is that the inlet air temperature sensor 1 is pre-turbocharger (mounted in the MAF housing) and inlet air temperature sensor 2 is mounted in the intake manifold. Although sensor 2 is the most important for testing, it should be considered that the sensor is a closed type (does not respond as quickly as an open type) and becomes quickly heat soaked by radiant heat from the intake manifold. We test within an envelope of 180-195 deg F for coolant temperature and 110-120 deg F for inlet air temperature. Because of the damped response of the IAT sensor, temperature through a pull may appear to be acceptable, however, marginal cooling air passing over the intercoolers will result in lower measured numbers due to actual elevated inlet temperatures not reported by the sensor.

Performance output varies significantly with out adequate cooling to the passive intercoolers on the NSX. All tests should be performed with cooling on the front facia, intercoolers, and generalized cooling around the vehicle 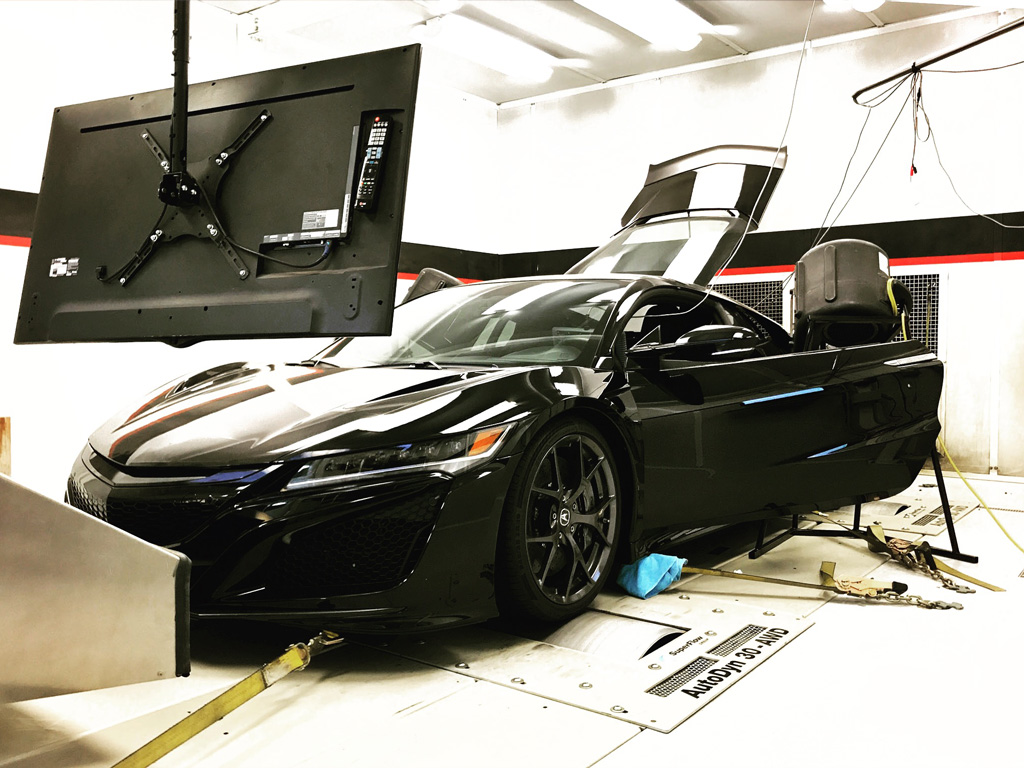 Third Gear vs. Fourth Gear Testing: An important point on the new NSX that was quickly realized is the electrical assist varies significantly between third and fourth gears. Third and lower gears receive significantly more electrical boost all the way to redline, where fourth gear’s electrical assist quickly tapers once the turbochargers reach peak boost. This significantly changes measured peak power which occurs around 6,800 RPM. For peak power testing, third gear can be used – however, for better resolution and stability, we prefer 4th

Completing a Sweep Test: To get the best results – the car should be placed in “track mode” using the Dynamic Mode dial (rotate clockwise and hold until track mode is enabled) – this will limit traction control intervention. Select manual shifting mode, and set the engine to the gear that testing will be performed in. We perform acceleration sweep tests between 2,000 and 7,500 RPM. For the most part, the transmission control unit will stay in the selected gear unless the engine bogs. To maintain the selected gear, we bring the engine up to 1,500 RPM and hold it steady. Make sure to monitor gear position, because too light on the throttle may cause the engine to upshift automatically. Progressively increase throttle angle to 100% between 1,500-2,000 RPM to prevent transmission kick down. By 2,000 RPM, the throttle should be at wide open throttle and past the final detent. The turbochargers will see peak boost around 2,700 RPM in our air density in fourth gear.

Analyzing the Results: The graph shows third gear (blue) and fourth gear (red). The graph includes corrected wheel horsepower, torque, and manifold (boost) pressure. In third gear, the engine produced 533 horsepower where fourth produced 481 horsepower. The results exceeded our expectation – providing some evidence that the factory net system power of 573 (measured without drivetrain loss as with the power measured at the wheels by the chassis dynamometer) may be conservatively rated. We were very impressed with the twin turbochargers ability to provide full response by 2,700 RPM yet to flow enough to maintain peak boost (14 PSIg) all the way to rev-limiter. The turbochargers are electronically controlled by the engine control module and appear to vary boost based on engine speed and electric assist. If engine parameters are maintained – testing results in variance of less than 2 horsepower between test runs – great accuracy for measuring actual performance gains once various components are changed on the vehicle. 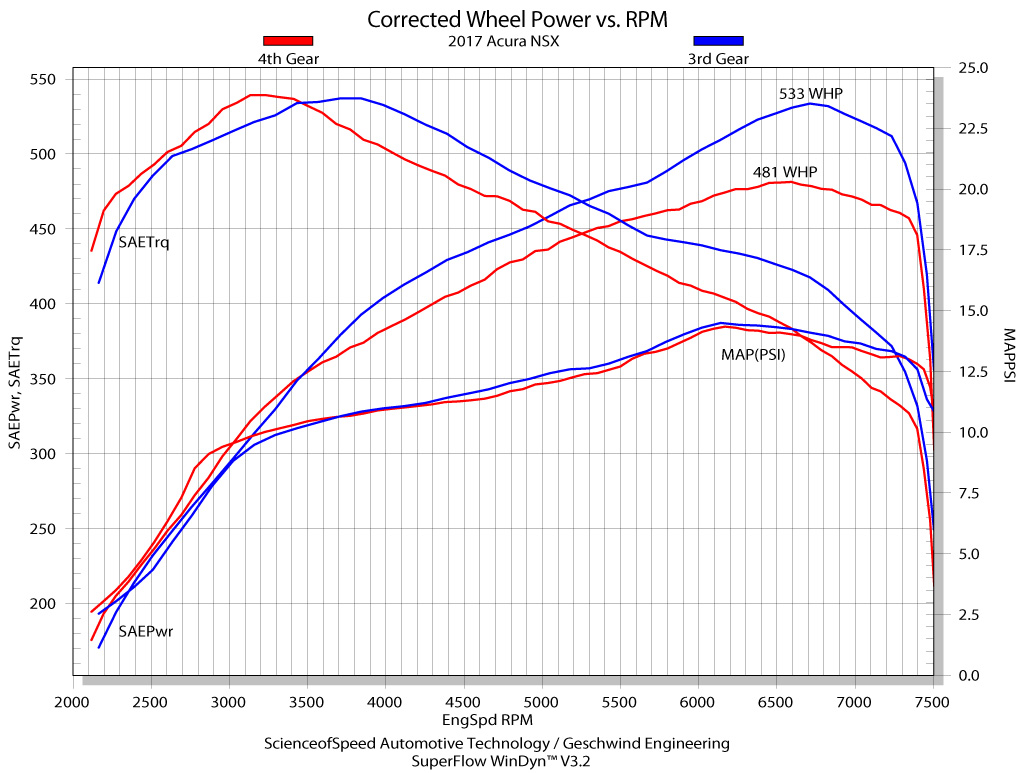 The results speak to the complexity of the new NSX powertrain and the requirements for accurate testing controls for reliable results. With how easy the 2017 NSX is to manipulate performance numbers - it's wise for customers to understand how tests are performed and if they were done with best practices to ensure accurate results of performance losses or gains.

With out properly cooling the NSX, monitoring engine sensors, and monitoring electric motor output - performance gains from adding aftermarket parts can not be accurately reported.

The electrified powertrain also brings up interesting questions – such as – when the factory advertises power output, for which gear was this tested in? It also adds a significant amount of variability based on electric assist that can vary based on hybrid battery charge and temperature - this on top of the variables to manage on an internal combustion engine.

But most importantly – the results demonstrate how the coupling of the turbocharged internal combustion engine with the electric motors results in astonishingly smooth power delivery – especially considering the high output of the system. For more information on our testing and products being developed for the 2017 NSX, please check out the ScienceofSpeed.com website!

One thought on “Powertrain Performance Testing the 2017 NSX”