This entry was posted on April 11, 2011 by ScienceofSpeed. 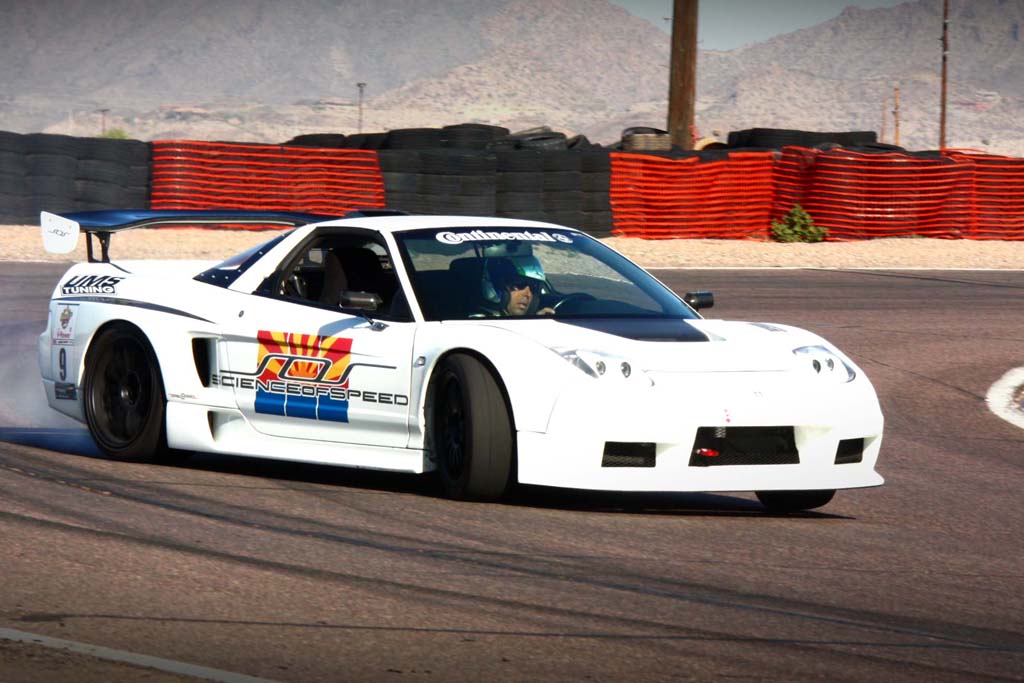 The Modified Magazine Tuner Shootout event consists of four stages of tests including dyno, quarter mile, high speed autocross, and a time attack road course. The event is sponsored by Continental Tires, - which provided the Continental Grand Am tire - as the spec tire required for use by all competitors. ScienceofSpeed entered two vehicles into the competition: ScienceofSpeed's 1992 Acura NSX and 2005 Honda S2000. The NSX is powered by a high compression 3.5L engine with individual throttles producing 450 bhp and the S2000 is ScienceofSpeed's new test vehicle for S2000 products. Both vehicles utilize JRZ suspensions. Mike Spec piloted the NSX and Chris Willson, ScienceofSpeed General Manager, drove the S2000.

Chris Willson has this report from the event:
This is the second time for ScienceofSpeed to compete in Modified Magazine's Tuner Shootout. The last event we participated in was in 2009. Our NSX's powerplant has dramatically changed since 2009. The car now is powered by a high compression ScienceofSpeed 3.5L engine which features our new stroked crankshaft, connecting rods, and pistons, as well as high lift camshaft. The engine is fed by ScienceofSpeed individual throttle bodies. Despite producing 450 bhp, we knew the car would be at a slight power disadvantage in this event due to its format. Unlike typical racing, there is no power limit or power to weight limit. In fact, the higher the power, the more points are rewarded. From past experience, we expected most of the cars to be turbocharged making in excess of 600 hp. However, we felt the throttle response and broad powerband the naturally aspirated engine provides would still make the NSX competitive. As it turned out, we were quite surprised to show up to the event with the only naturally aspirated car. It was a bit like showing up to a gunfight with a knife, but at least we had a good sized knife.

It was also a first for us to compete with two vehicles in a tuner shootout. Our 2005 Honda S2000 is a new addition at ScienceofSpeed. This S2000 is a development vehicle for several new products in testing including a stroked 4 cylinder engine and suspension modifications. The engine is mildly modified, producing around 30 hp over a factory engine. The S2000 is largely otherwise stock with the exception of track preparation.

We were grateful for Continental Tires to provide Grand Am spec tires for competitors of the event. These tires were required for all competitors and provided quite a bit of drama. No competitor that we are aware of had ever used these tires - and they were a definite unknown to us. The tires were only available in a handful of sizes which had us selecting tires that were larger in the front and narrower in the rear for the NSX. The tires were expected to arrive to the competitors 2-3 weeks before the event such that we could check fitment and get some experience with the tires. We planned some testing for two weeks ahead of the event to get some experience with the tires on both the S2000 and NSX. Those two weeks passed and as the event neared, we began to panic. For whatever reason, the tires were delayed and were never delivered when expected. We received the tires for the NSX only a day before the event and unfortunately, the set for the S2000 never arrived. We were told they were shipped, FEDEX was blamed, but now a week after the event with no tires received, we suspect they were never sent. It's too bad, the S2000 - for being as "plain" as it is - is quite the animal on the track and very exciting to drive. 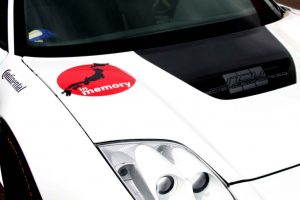 We dedicated our participation to the victims of Japan's earthquake and tsunami. Each of the two cars wore a badge on the front hoods. We were very grateful to have John Naderi feature the car and this badge in the live coverage of the event.

Without having the tires in advance for testing, we made some decisions on the suspension for the NSX that I now regret. We knew the tires were 20mm narrower in the rear and 10mm wider tires in the front and expected front grip to be low due to this car having factory suspension bushings limiting us to the amount of negative camber we can achieve in the front. We expected the car to be very loose in the corners and adjusted the alignment to be very neutral in the rear and lowered the rear spring rates significantly by 25% compared to the front. As we quickly found out the day of the event, we were too aggressive with softening the rear and had problems with transferring too much weight to the rear of the car under any bit of acceleration. You can see this in the photos from the event, especially from exiting turn 11 how the car squats in the rear. Corner entry was great, but as soon as the weight was transferred to the rear under acceleration, the rear would dig in and prevent the front from getting any amount of grip. The effect was that you literally had to wait for the car to unwind well into corner exit until you could apply any throttle, eating away at precious time and momentum on to Firebird's front long straight. The problem was exacerbated by the lack of load to the front preventing the front tires from achieving proper temperature while the rears quickly reached temperature and were as sticky as glue. We tried to make some adjustments at the track including increasing the rear stabilizer spring rate, however, we simply didn't have enough time to tear down the suspension and make the required changes.

Everything else about the car was literally perfect. The engine was the real rockstar that day. Despite being the only naturally aspirated car to compete, the immediate throttle response and broad torque curve made the car very competitive against most of the high horsepower cars. If we could have simply been able to apply more throttle sooner out of the corners, it surely would have been even more competitive. The sound of the car with the individual throttles at work was a definite crowd pleaser - we had many spectators come to our paddock space and compliment the sound of the NSX. I love my turbocharged 4 cylinders, but there's something visceral about the sound of the NSX's V6 engine with individual throttle bodies at wide open throttle.

Despite not being able to drive the S2000 in Modified's event due to the missing in action tires, we were still able to compete with the S2000 in NASA's Time Trial event. We used Nitto's NT01 tire, which is the tire we normally run in NASA's TT-B (Time Trial B) class. This was the first time running JRZ's RS Pro suspension dampers and with a few minor setup changes before the session, clocked my personal best with the only change being the suspension. With this car, I am typically consistent on each lap within a tenth of second. With the RS Pro, I immediately dropped a half second in time with the only change being swapping the KW Variant 3 suspension for the RS Pro. The RS Pros produced quite the "wow" factor in how much more chassis control they offered. We are looking forward to running again with this suspension as soon as possible!

I can't share the results of the event with you until Modified Magazine's August issue hits the shelves in July. However, I can say we were pleased with the results. Of course there are a couple "wishes" including wishing to have more time with the tires to have set the car up properly and the wish that these magazine events would be closer to true racing where power to weight is equalized, or at least factored into the scoring. I had to say, it's not bad for a car that was the oldest to compete that day - nearly twenty years old! We were proud to show what an amazing car the NSX still is. 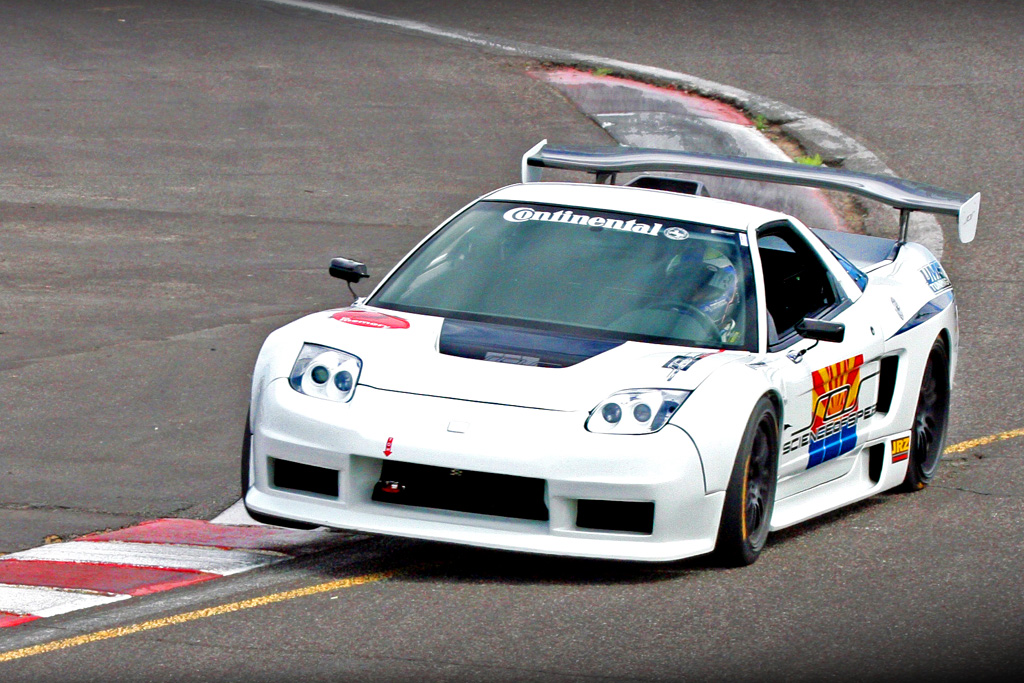 Big thanks to Modified Magazine, Continental Tires, and NASA Arizona for hosting a great event - and special thanks to our sponsors UMS Tuning and JRZ Suspension.