This entry was posted on June 8, 2020 by ScienceofSpeed.

With CT-Engineering's closing in 2018, ScienceofSpeed lost its supplier of components for the ScienceofSpeed Supercharger Kit. The loss of these positive displacement supercharger systems left a big gap in forced induction options for the NSX enthusiast.

Now in development, the following is a technical introduction to the ScienceofSpeed TVS Supercharger System.

The Comptech-based system had a number of advantages, including ease of install thanks to the bespoke inlet and intake manifold that allowed "drop-in" performance to the NSX engine. ScienceofSpeed partnered with Comptech when it relaunched in 2007 as CT-Engineering to develop a high -output version of the CT-Engineering supercharger. The ScienceofSpeed System utilized the cast inlet, intake manifold, and belt drive plate from CT-Engineering with a larger supercharger and more advanced engine management system to increase power from the 80 horsepower gain to over 120 horsepower.

Although it was a great combination that produced over 120 wheel horsepower reliably, it had limitations for further expansion, including:

The primary challenge to a positive displacement supercharger based solution for the NSX is the large capital investment of development and production of the cast inlet and intake manifolds required to mate the supercharger to the engine. Having to start from scratch meant that this would be the most ambitious project ScienceofSpeed has taken on. However, with modern tools at our disposal and a talented team with ScienceofSpeed's Product Design Engineer leading the program, we were excited about the opportunity.

The first determination to make was what type of supercharger would be used. After discussions with several companies, the decision was made to partner with Magnuson and base the design around the venerable TVS1900. This 1.9L supercharger is the ultimate in OEM quality designs and features a very efficient twin vortex design that matches the performance of the larger 2.1L supercharger used in the last generation kit from ScienceofSpeed.

The next step involved intake manifold design. The prior Comptech design is very shallow, due to the superchargers requiring an external bypass valve to redirect airflow during idle and part throttle conditions. This shallow design results in cylinder airflow disparities during light load conditions, and limits the packaging of an integrated intercooler. With the TVS supercharger's internal bypass valve, the external valve is eliminated and the NSX is able to benefit from a deeper manifold in the V of the engine allowing the inclusion of an optional integrated intercooler.

Star-CCM+, an advanced computational fluid dynamics (CFD) application, was utilized to analyze the three manifolds. Simulations were conducted to determine if the deeper manifold designs would have a negative performance consequence from reduced air velocity. 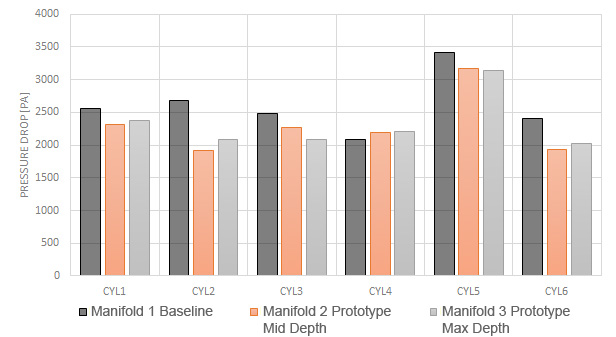 Despite the increase in volume, cylinder air velocity was negligible between the baseline and prototype manifolds, with air velocity actually increasing with the intercooler installed.

In addition to overall manifold performance, the intercooler design was analyzed for thermal efficiency and to verify coolant flow rates required to maintain an efficient system.

The results of the CFD simulations allowed ScienceofSpeed to select prototype Manifold 2 based on the manifold having the lowest average pressure drop, and improved air velocity performance, and decreased pressure fluctuations compared to the baseline manifold.

Once this process is complete, manifolds will be prepared for aluminum casting and fuel and engine management systems will be finalized. The first prototype kit is being installed now and we will update this page with information as we are closer to being production-ready.

In the meantime, visit: